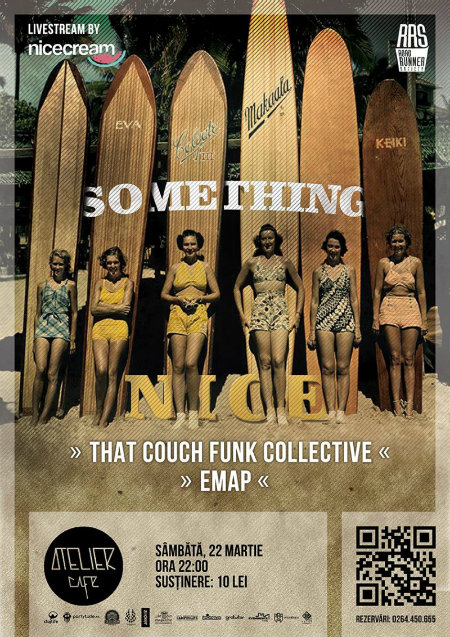 Sâmbătă, 22 martie
Ora 22:00
Susținere: 5 lei
Sugar, spice, and everything nice!
These were the ingredients chosen to create the perfect little girls
But Professor Utonium accidentally added an extra ingredient to the concotion – Chemical X! Thus, The Surfer Girls were born! Using their ultra-super powers these girls have dedicated their lives to fighting crime, big waves …and the forces of evil.
Dance like nobody’s business!
Saturday night, Road Runner Society, nicecream.fm and AtelierCafe, joind forces for a dance-off that will reach the hall of fame in Paradisco! With a master-plan carefully put together that even Modjo Jojo is proud of, we are taking it to the next and share the love by LIVE stream.
Our weapons are sharp even infectious, colourful and evidently loud with a side effect that will keep your legs on fire.
✵ That Couch Funk Collective, the mastermind behind nicecream.fm disco-funk repertoire is on killing-spree this couple of days, beating the shit out of Bucharest`s evil forces, like this
https://soundcloud.com/thatcouchfunkcollective
EMAP, favored by Sea God Neptune he rolled into the battle more than a decade now. He is a genuine pirate who knows the secret path to the electro-disco-funk hidden treasure in outer-space.
https://soundcloud.com/mup/no-smokin-into-space
The weather will be just right for a easy sleazy outfit. It`s about to dance lov.
Pagina evenimentului: http://bit.ly/SomethingNiceAtAtelierCafe